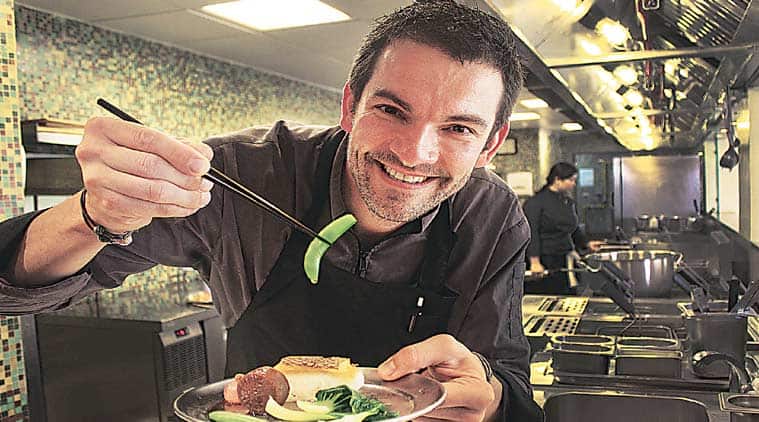 Chef Laurent Peugeot was named the ‘Best Young Chef of the Year’ in 2007 by Gault Millau; as part of the pop-up menu, Peugeot serves fresh strawberry with syrup of strawberry, espuma kapao (thai basil).

Overlooking the lush Corton-Charlemagne vineyards in France’s Burgundy region, Chef Laurent Peugeot’s restaurant, Le Charlemagne offers a panoramic view of the valley by day. By night, the restaurant transforms into a food and light show. Each of the 11 tables at the restaurant — known for its fusion of French-Japanese cuisine — are fitted with special bulbs. With every course, the dish is bathed in a different colour of the spectrum to add to the visual story. “We always eat with our eyes first. For me, presentation of food is important,” says the one-Michelin star chef. Peugeot was named the ‘Best Young Chef of the Year’ in 2007 by Gault Millau and obtained his first star in the same year.

In the city for a week-long pop up organised by Singapore-based company 4XFOUR, Peugeot is serving some of his signature dishes at Juhu’s JW Marriott. His fusion food menu will include chicken breast with yuzu koshio, a Japanese lime and chilli mix, and scallops that are marinated in a sake and soy sauce. A champion of the slow cooking movement, Peugeot will use the thermal circulator and sous-vide the meat to cook his creations to perfection.

Having spent five years in Japan, discipline in cooking as followed by Japanese chefs comes naturally to him. “Their approach to food is methodical and precise. At the same time, Japanese food is healthier compared to French food which is often made using lots of butter, cream and wine,” he says. For over a decade, Japanese chefs have helmed the most prestigious kitchens in France and the country’s cuisine is hot property. For instance, Chef Shinsuke Nakatani pays homage to French cuisine at his eponymous restaurant in Paris. Similarly, Chef Shinichi Sato moved to Japan more than a decade ago and started Passage 53 — a popular restaurant housed in a 19th-century Paris arcade — which won two Michelin stars within two years of opening.

Peugeot’s culinary journey began in his home country and took him to Japan. “I was working with two Michelin star chef Jacques Lameloise 15 years ago and he had a Japanese girl in his team. That’s when I fell in love with her and the cuisine,” says Peugeot.

As part of a series of pop-ups, JW Marriott will host Chef Giovanni d’Amatp from April 15 to 19.

Sun Apr 12 , 2015
Spread the love MasterChef Australia Season 6 winner Brent Owens Brent Owens has been in love with food for as long as he can remember. For him, food is the greatest glue between people, a cultural connector that is at the epicentre of every festival, occasion and event across the […]